For other versions, see Kylie (disambiguation).

She is the daughter of archaeologists Devon and Freya Reynolds, granddaughter of Aeryn Reynolds, and the younger sister of Blake Reynolds, a professional duelist.

Due to her parents' work, Kylie was constantly moving, never staying in one place for more than a couple of months. Because of that, she resisted in forging any lifelong friendships, knowing it would be pointless. The only friendship she was able to keep with her parents' work was with Jesse Anderson, who she met in Norway as their fathers were close friends.

Following a summer with Jesse, Kylie was told about Duel Academy when she went to visit Blake in Japan.

Kylie is a slim girl of average height and weight. She is an exact mix of her parents, inheriting her mother's signature dark red eyes, and her father's pale, blonde-white hair, which is mid-back length and slightly curly. She eventually dyed her hair black with various shades of blue highlights.

Kylie wears a slightly modified version of the Obelisk Blue Girls' uniform: black sleeveless turtleneck shirt, open vest-jacket, blue skirt, black leggings (or biker shorts), calf-length brown boots, and black fingerless gloves. Around her waist, she has a belt attached to her black, galaxy-designed-Deck Case. She also wears a pair of silver, small hoop earrings. Around her neck, is a blue teardrop gemstone on a black thin chain, which she reveals has been in her father's family for generations.

When not in school uniform, Kylie wears a sleeveless silver-white jacket over a black elbow-length sleeved shirt with a picture of the moon and stars, black jeans with sneakers or boots, depends on her mood.

Kylie is a young girl with fascination in ancient history and mythical creatures. With her family constantly moving since she was young, she kept to herself, not making friends, as she knew the friendship would not last. The only friend she could keep for a long time is her childhood friend Jesse Anderson. Even though of her parents' busy jobs, she still maintains a normal parent-child relationship. She has a close bond with her parents.

When she was younger, Kylie was almost always found reading a book and did not know how to make friends and didn't find it necessary since their family was always on the move. However, thanks to Blake getting her into Duel Monsters, her social skills are much better and she isn't afraid of making friends. She's able to interact with people her age and older through dueling and the Duel Tournaments she'd attend.

With her newly discovered ability to see Duel Spirits, Kylie still gets freaked out over seeing Halley and tends to jump to surprise when Halley shows up without warning. By the time she is one of the chosen students to protect the Sacred Beasts, she is fine with Halley or any other of her Spirits showing up. She is most often seen with "Solar Magician" hovering nearby.

Kylie does not like it when people brag, think they know everything, or don't try. She can't stand people like that but has learned that not everyone is the same and everyone has different ways to go. She learns that after meeting Jaden and his "slacker" ways, especially with not trying hard on his homework. Though, she's kind of declared herself as his tutor and makes him work (his sister and aunt are very grateful for that).

Prior to the series

Born in Oslo, Norway, Kylie is the youngest child and only daughter of archaeologists Devon and Freya Reynolds and the younger sister of Blake, by eight years. She lived in Oslo up until second grade when they moved due to Devon and Freya's jobs. In kindergarten, she befriended Jesse Anderson who protected her some bullies.

With her parents' busy jobs, the Reynolds family traveled a lot, resulting in Kylie and Blake taking online courses, and never staying in one place for a long time. To avoid trying to make friends, Kylie would just go to the nearest library and read on the country's ancient history. While Blake would try to get her outside and not be so antisocial, most attempts didn't work.

While they were in Peru, Blake began to notice Kylie begin to enter the stage of antisocial. Worried for her and her health, Blake pulled her to a Duel Monsters Tournament, hoping it would spark something in her. To his surprise, it did: Kylie quickly got into it and Blake quickly helped her create her own dark, even gifting her first card; "Red-Eyes Black Dragon", which previously belonged to their father.

The summer before she applied for Duel Academy, Kylie joined Jesse, who was going to be in a Dueling Tournament. In the end, she got a surprise but promised to keep it a secret. Before leaving the Tournament, Kylie was drawn to a set of cards. It was then she came into the possession of the "Dracosmos" cards and also learning that she can see Duel Spirits. Upon returning home, Blake sent Kylie a notice about Duel Academy. Talking with her parents, it was then decided Kylie could apply.

Though not shown, it is implied that Kylie studied countless hours for the Duel Academy Entrance Written Exams. Being a year younger, she had to do well so she would be allowed in. Luckily, she passed with flying colors and was allowed to proceed to the Duel Portion of the Entrance Exam.

Kylie has a normal parent-child relationship with her parents. Despite her parents' busy jobs, they always made sure to have time for Kylie and her brother. Both her parents fully support her dueling.

Kylie is extremely close to her brother, much closer to him than her parents. When they were younger at the start of their traveling with their parents, Kylie would often be looked after by Blake, who in turn was watched over by a close friend of their parents.

As they got older and more of Kylie not wanting to make friends came out, Blake would end up dragging Kylie out of the library. The only time Blake was really successful was when he got Kylie into dueling. She was ten when Blake took her to her first Duel Monsters Tournament, in Peru where their parents were doing some research on Machu Picchu. Kylie was quick to accept Duel Monsters and Blake used it to help her become more social and actually talk to people. Kylie started spending more time outside of the libraries and meeting people through dueling. Her social skills also improved thanks to dueling. Blake gave Kylie her first card, "Red-Eyes B. Dragon" and then helped her make her deck.

Jesse is Kylie's childhood best friend, who they met through their fathers, Devon and Christian. They were later placed in the same kindergarten class, and Jesse had to protect Kylie when she was getting bullied. Despite moving away when she was eight because of her parents' work, Kylie and Jesse remained in contact (with the help from their parents). Jesse is Kylie's go-to person when she doesn't want to talk to her brother or parents about something. He is always there for Kylie and her for Jesse. She normally calls him every day and just talks about random things, and since starting Duel Academy, she talks about her days.

Some people confuse her for being Jesse's girlfriend or sister now that she's dyed her hair, but both quickly exclaim (or yell) that they are best friends only.

Halley is Kylie's Duel Spirit and her first Spirit Partner. It was thanks to Halley that Kylie is even able to see and speak with Duel Monsters. It took her a while to get used to Halley popping out and surprising her, but soon she got the hang out it.

Kylie duels with a "Dracosmos" Deck, which focuses on Dragon-type monsters that are based on the planets of the solar system and astronomical objects. Her style of battling relies around on providing card advantage when they are Summoned or Banished. In the first arc (of the first season), Kylie has "Blazar, the Shining Dracosmos" as her "ace", which later can be upgraded to "Quasar, the Ultimate Dracosmos". During the Shadow Rider Arc, Kylie ends up revealing a new powerful dragon called "Inanis, Dracosmos of Nihility". In the final duel against Kagemaru, while teaming up with Jaden, Kylie reveals the "king" of her Dracosmos, "Unus, the First Dracosmos".

When she first got into dueling, Kylie ran a Dragon Deck. Her play strategy was mainly working around her "Red-Eyes Black Dragon", the very first card she got from her brother (Red-Eyes B. Dragon previously belonged to her father who had given it to Blake, who in turn gave it to Kylie). While she no longer, actively uses this deck, Kylie still keeps her "Red-Eyes B. Dragon" in her "Dracosmos" deck.

This deck makes a return in Trials of Light, while she is under the control of "Radiant Chaos Dragon", she received from Sartorious. Her main playstyle is focusing on getting as many Dragon-types in her Graveyard and then Summon her "Ethereal Dragon" (which she got over the summer from an unknown source), and increase it's ATK by 300 for every Dragon-type in the Graveyard and Banished.

In Trials of Dimensions, this deck appears while Kylie is under the control of Jaden's childhood card, Yubel. This is one of two decks Kylie uses while under Yubel's control. Much like while controlled by "Radiant Chaos Dragon", Kylie's main strategy is to get as many Dragon-types in her Graveyard/Banished and summon "Etheral Dragon".

Sometime before the Shadow Riders, Kylie makes the decision to merge her childhood and current decks together, forming her Galaxy Dragon Deck. She has no main strategy for this deck, opting to use strategies from both decks, often confusing her opponents. This deck is first seen during her match with the Gravekeeper's Priestess. She reveals the joining of her decks after her duel with Camula, claiming she did it to confuse the vampire.

The second deck Kylie uses while under Yubel's control is a Sacred Beast Deck, which only appears when she duels Adrian Gecko. This deck is different from the one Yubel used while controlling Marcel Bonaparte. This Deck included cards that could duplicate themselves upon activation or being Summoned to the field (such as "Triangle Force", "Delta Barrier", and "Illusion Brigadier"). With these cards, he could meet the requirements for Summoning each of the Sacred Beasts easily. In this Deck, Kylie's ace card was "Yubel".

In Capsule Monsters GX, Kylie gets the following monsters:

The name Kylie comes from Australia meaning "boomerang". It is also the feminine version of the name "Kyle". The name Regine is Norwegian for "Queen". The name Reynolds is a patronymic surname meaning "son of Reynold", where the given name of the father, "Reynold", or "Reginald", was a Germanic name meaning "Powerful Ruler" (possibly an alteration of the Old French name Reinold). 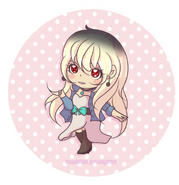 Retrieved from "https://novalioness.fandom.com/wiki/Kylie_Reynolds?oldid=43754"
Community content is available under CC-BY-SA unless otherwise noted.